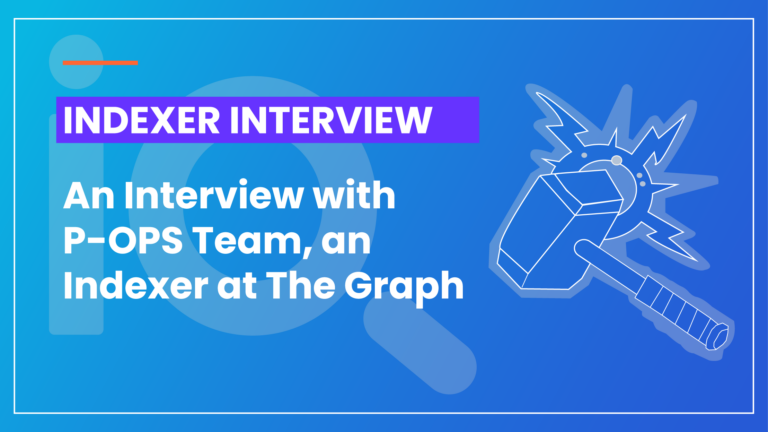 We interviewed the team at P-OPS, an Indexer at The Graph, to better understand what Indexers do and how their work relates to the larger ecosystem.

When Delegators stake, i.e. “delegate,” GRT with Indexers, they are eligible to earn a share of Indexer rewards, which are earned as Indexers are paid for their indexing and query services. Each Indexer on The Graph determines their own rewards policy, identified as rewards parameters. Consequently, it is very important that Delegators research the Indexer(s) they choose to delegate to – it might be helpful for Delegators to think of the process as forming a partnership.

To better understand what Indexers do, we interviewed the team at P-OPS (Twitter and Telegram), an active Indexer at The Graph. 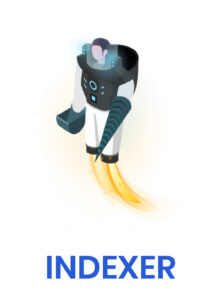 GRTiQ: We’re interested in hearing how you would describe the role of an Indexer in The Graph’s ecosystem?

P-OPS Team:  Indexers are at the forefront of The Graph’s ecosystem, running complex and demanding setups to serve all other projects, especially dApps, with data that they need to operate. By indexing subgraphs for specific projects, the Indexers are then able to respond to queries, for which they get paid by the entity that is querying them.

To put it in simple terms, all the DeFi projects you see out there need data to show you their awesome dashboards, prices, and so much more. Indexers are the ones that facilitate this.

GRTiQ: How do you describe the daily work activities of an Indexer?

P-OPS Team: Currently, we are making sure our hardware and setup are good. For example, we are doing some experiments on software, such as the Ethereum archive nodes, that we have to run. Besides that, we are also actively managing the Delegator stake, making sure we occasionally close our allocations to release rewards, then re-open them with the new Delegators’ stake included. The bulk of the daily activities right now is being active within the community, helping newcomers and interacting with our own Delegators through different channels.

Although the migration from the hosted service to the decentralised network has not started yet, once that happens we will have much more work. At that point we will have to choose (and experiment) which subgraphs we will index, to make sure we optimise profits and, at the same time, serve the ever-growing DeFi industry.

GRTiQ: How would you characterize the competition, if any, between Indexers?

P-OPS Team: Presently, the only competition is with fee cuts and marketing, as we are all otherwise serving the same subgraph, and staking rewards are also the same (not accounting for the different fee cuts). Once more subgraphs are migrated to the decentralised network however, there will be a lot of competition for all Indexers to optimise their ROI in different ways.

GRTiQ: How would you describe to Delegators the importance of selecting a good Indexer partner?

P-OPS Team: Currently, it is hard to select a good Indexer, since we are all doing the same thing. The only way to currently select a “good” Indexer would be how active they are within the community, and what their fee cut is. In the future, however, it will be very important to choose the right ones – those who have proven they can handle the job.

Our advice to Delegators is this: once we start migrating the subgraphs, the Delegators should wait a bit as all Indexers will be looking into optimisations, so it will take time to show any kind of stability and good performance. Keep in mind this will be new for us, too! (Except to a few of us that participated in the testnet, but even that was not completely the same as it will be on mainnet.)

Finally, do not fall for currently low fee cuts, as that can change quickly in the future! And make sure you are able to contact the Indexer at any point. This is one reason, for instance, why P-OPS has our own Telegram group.

GRTiQ: As an Indexer, how do you go about determining your rewards parameters?

P-OPS Team: At the moment, we are actually giving our Delegators a part of our indexing rewards, but in the future we plan to have about 10% net commission. It will, of course, depend on the amount of delegation and the costs that will incur with indexing.

Since indexing many subgraphs will mean opening and closing many more allocations than at the moment, the real fee calculations will only happen after we have a lot more subgraphs migrated from the hosted service. As many Delegators may already know, the Ethereum gas fees are quite high lately, and we need to pay those fees each time we open and close any allocation. Keep in mind there will be hundreds of subgraphs in the future, so the gas fees might be high and could make all Indexers change their rewards parameters significantly.

GRTiQ: What are some of the challenges of being an Indexer?

P-OPS Team: There are many parts to the Indexer infrastructure. For instance, we run Ethereum archival node, which is one large database of all historic info on the Ethereum chain. Besides that, we have to make sure all Indexer components work and mitigate in times when issues or bugs happen.

The single biggest challenge will definitely be managing all the hundreds of subgraphs, identifying which to index and which not to, and scaling the hardware in order to facilitate that.

GRTiQ: How would you describe the relationship between Indexers and Curators?

P-OPS Team: Curators are the first line in The Graph ecosystem, as they are the ones that find, identify, launch, and curate subgraphs. Indexers will rely a lot upon their ability to determine what is a quality project to index, and what is not.

The relationship with Indexers and Curators generally is not direct, and we do not need to choose which Curator to work with. However, we can communicate with them on our Graph forums and determine which Curators are really good at what they do. This is mostly important when new subgraphs are introduced. Otherwise, the main relationship is Curators signaling which subgraphs are worth indexing, by staking some GRT to them. The more GRT staked, the better the signal, and with that, the quality of the subgraph.

GRTiQ: We’re curious if Indexers will ever specialize in any specific ways that are different from other Indexers?

P-OPS Team: At the moment there are not many specialisations, but in the future, there could be. We see two directions Indexers can go here. One is to optimise staking rewards, and the other is optimising query fee rewards. They are not mutually exclusive, however, and we believe most will look for the golden middle.

GRTiQ: How would you describe the importance of a committed and educated Delegator Community to The Graph and, more specifically, to Indexers?

P-OPS Team: Delegators are very important to Indexers, as they enable us to get more stake, which in turn means we can index and allocate the funds better, thereby optimising rewards for everyone. Understanding how the indexing works is also important to know for the Delegators.

Ultimately we believe it’s most important that the Delegators really get to know the Indexers inside out, which in turn can help to separate the good ones from the bad ones. Not just by performance but also by how they communicate with the community and keeping them honest in terms of fee cuts. In the long run, this helps the ecosystem as a whole, not just the good Indexers and Delegators.

GRTiQ: When you think about the future of The Graph, what do you envision?

P-OPS Team: The Graph has still a long way to go, but the possibilities are basically limitless. There are tens (maybe now even hundreds) of billions of queries already happening on a monthly basis. We expect this to exponentially grow in the future. Going cross-chain into other networks, it will make it the de facto service for all these networks. And it does not have to stop there. The Graph can also serve real-life data, such as Forex, commodities, stocks, and so forth.

GRTiQ: What sort of challenges does The Graph face that the Delegator Community should be aware of?

P-OPS Team: The first step will definitely be the migration from the hosted service. That will kick start the ecosystem in a big way. We believe many other networks will also be looking forward to having The Graph index dApps on their respective chains.

We believe penetrating the different markets and making key partnerships within the blockchain industry will not be hard at all. It will mostly depend on how quickly the team can iterate on new software versions.

This is why the biggest challenge we see is actually in the development of the software for The Graph network (node component, indexer component, agent component, and the gateways). Penetrating the traditional industries might also prove as a challenge, but one we are sure that will happen in the future.

GRTiQ: What’s the next big thing the Delegator Community should be watching for regarding The Graph?

P-OPS Team: There are two things. One will be the migration from the hosted service to the decentralised service, which will be a big event for Indexers as then everyone will be trying to find their optimised setup and strategy. The other one will be cross-chain narrative, where we believe The Graph will add many other networks, That will lead to many more subgraphs being added and indexed (for example, Binance Smart Chain, Solana, Polkadot, Avalanche, Cosmos, Harmony).

GRTiQ: Lastly, are there any common misunderstandings about The Graph or Indexers you would like to address?

P-OPS Team: Most people still do not seem to understand how much data is already being served to all the dApps, to enable them to operate normally. All the DeFI applications you currently see, utilise The Graph (currently hosted) service. And the demand is skyrocketing on a weekly basis at this point.

The other one is that the Indexers APY or ROI currently are far from what they will be once the migration to decentralised network happens. We expect a big shift at that point, and only then you will be able to determine good Indexers from the average or poor ones.

P-OPS Team is a group of 8 individuals from all across the globe. We are a group that was bound together by the beauty of blockchain technology, now already 2 years ago. Most of the individuals have been in blockchain for much longer than that though, with total experience in blockchain technology spanning more than 25 years. The group first came to be as an extended team of Harmony, where we tested and debugged the Harmony blockchain for more than a year. Now, we are the biggest validator on the Harmony network and are actively involved in grants, bounties, community, and governance. We also run the Harmony testnet by ourselves.

Since the start of 2020, we decided to expand into other networks, to support the cross-chain narrative, which is the future of how everything will operate on the blockchain, in our opinion. We are now actively involved in many more projects, such as Solana, Avalanche, The Graph, Sushiswap, Bancor, and more.